The fans have chosen the first city to be announced for Janet Jackson’s largest ever world tour celebrating for the first time the Icon’s 35 number one hits in 35 global cities. An overwhelming amount of fans submitted suggestions to www.janetjackson.com to select the first announced site of her new tour.

The winning city is Hong Kong.

This tour will differ from her previous concert schedules in that she will perform music exclusively from her chart topping CD NUMBER ONES. There will also be a focus on venues that will allow Janet to be up close and personal in a much more intimate setting.

The Hong Kong performance will take place at the Hong Kong Convention & Exhibition Centre on February 14th. Tickets will go on sale on 10 am next Tuesday 14th December. 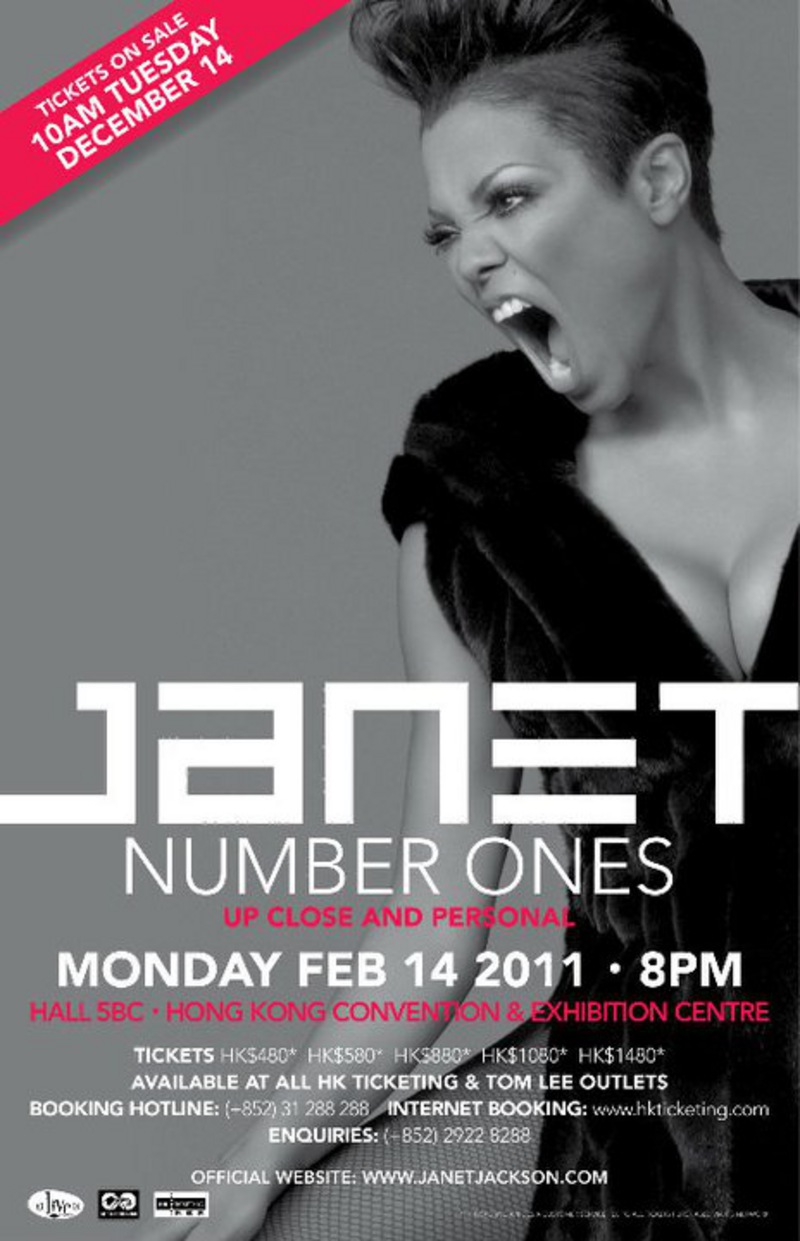 “The fans really reached out and voted for Hong Kong to be the Valentine’s Day city of our Number Ones tour.
I am thrilled to receive your votes and I will be performing in Hong Kong Feb 14, 2011!”

Janet has also selected the first fan winner of the contest in voting for the cities. The winner will be announced on www.JanetJackson.com and they will receive an autographed copy of NUMBER ONES and an autographed copy of her upcoming book “True You” (on stands February 8th). In each of the 35 cities Janet will dedicate one of her number one songs to the city and she will also recognize 20 young people whose lives and work have enriched their communities in a major way. If you wish to submit someone you know in one of the selected cities please visit www.janetjackson.com.

Janet currently stars in Tyler Perry’s successful and critically acclaimed motion picture, “For Colored Girls.” Janet recently achieved number one iTunes status with her performance of “Nothing,” written and produced by her in association with Johnta Austin, Bryan-Michael Cox and Jermaine Dupri for the film “Why Did I Get Married Too?” for which she also starred. The tune is currently an awards contender as best song in a motion picture.

Her upcoming book “True You” is being published by Karen Hunter Publishing, an imprint of Pocket Books at Simon & Schuster will be in stores on February 8th. Janet’s first book will reveal her unique, insider’s perspective on dieting and exercise-from her past, present and future-with help from her personal nutritionist, David Allen. True You chronicles Janet’s lifelong struggles with weight and self-esteem. The book is a self help/esteem book where Janet will use anecdotes from her real life to illustrate the power of self esteem and how she struggles and her continued growth as an artist and a woman.