Janet Jackson coming to Singapore despite earlier ban on songs

Janet Jackson coming to Singapore despite earlier ban on songs.

I’M ‘NOT A GRUDGE BEARER’ 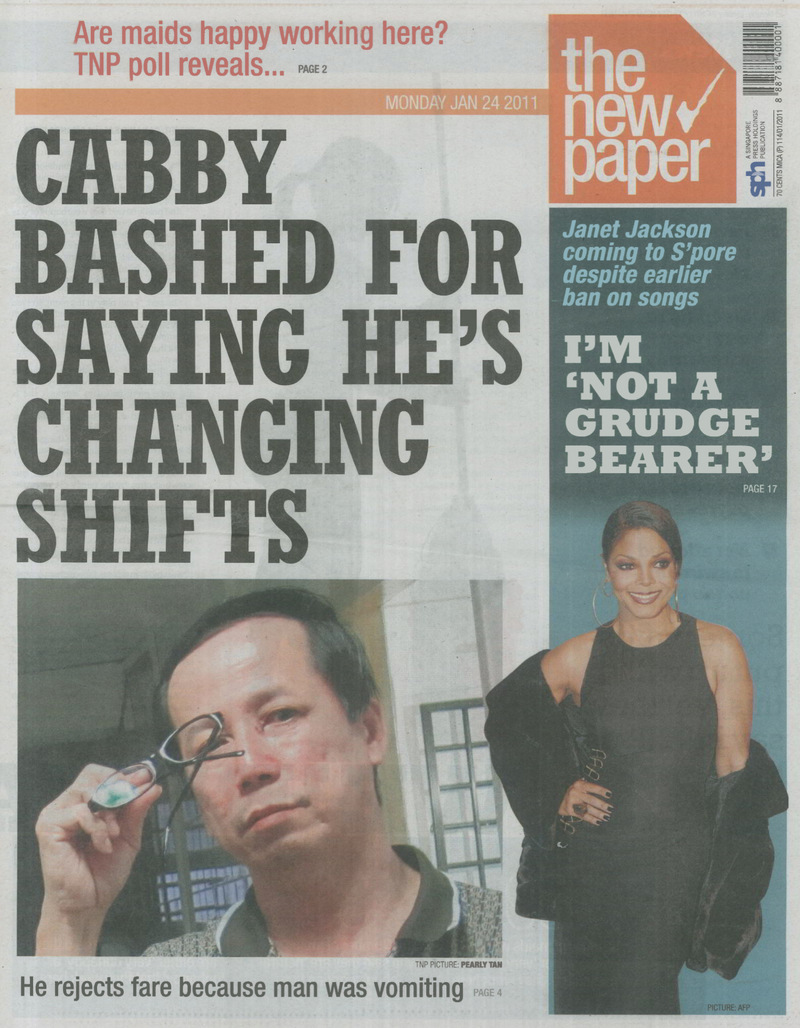 JANET Jackson is clearly the forgiving kind. She had one album banned and a song disallowed on radio here, but the US pop diva says she’s “not a grudge holder”. Which is why she’s so excited to return to Singapore after 16 years. But that’s not all. She picked Singapore to kick off her Number Ones: Up Close and Personal World Tour 2011 on Feb 7.

In an e-mail interview with The New Paper, the 44-year-old singer-actress – and now author – said she was looking forward to returning to Singapore after last performing here during her Janet tour in 1995.
“I remember how wonderful everyone was,” she wrote.

Singapore is one of the 35 cities on her tour itinerary. The stops were nominated and voted for by fans on Jackson’s website after she called for votes last year.

“When you are in the studio recording a CD or filming a movie, it’s not the same. There is so much energy when you are on stage and it is nice to give that joy to the fans.”

She will dedicate one of her 35 No. 1 songs to each city. What did she pick for Singapore? Someone To Call My Lover.
Jackson’s 1997 album The Velvet Rope was banned here due to three objectionable tracks, one of which had references to homosexuality. Another sexually explicit song, Would You Mind, from her subsequent album, All For You (2001), was also not allowed on local radio stations. 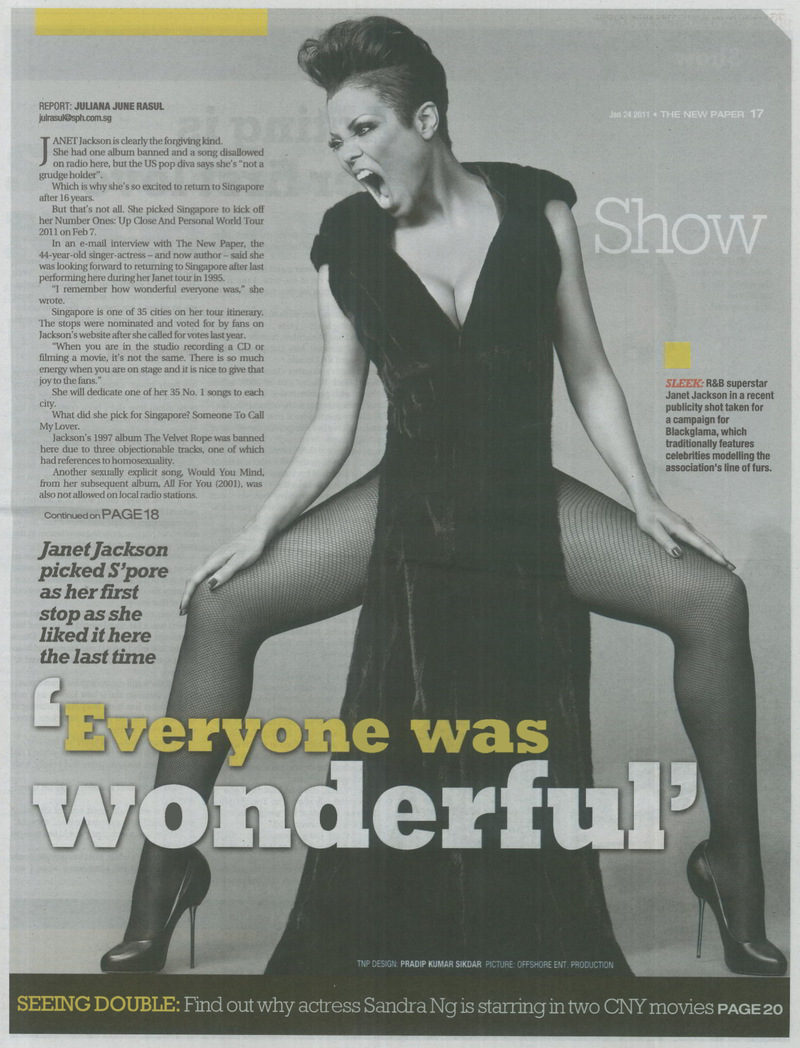 Acting is her first love

Asked how she felt about the bans, Jackson would only say that her songs are “personal” to her. “I see what I am feeling and am motivated by what is going on at the time. I put it out there and hope that my fans can relate to it,” she wrote.

Her latest tour – her sixth to date – will see her performing her No. 1 hits. Released last November, Number Ones is her second greatest hits compilation after 1995’s Design Of A Decade.

Next month’s Number Ones tour follows her failed Rock Witchu tour in 2008, which was beset with problems due to illness and did not cover Asia due to the economic crisis. But she’s coming back in a big way. Her new tour will see her recognising the efforts of up to 20 young people from each city who have been giving back to their communities.
The 20, as well the folks who nominate them, will be invited backstage at her concert here to meet the star herself. The young people have not yet been picked, but fans can go to www.janetjackson.com to send in their nominations.

Photos of Jackson at recent events suggest she’s well into the rumoured punishing fitness regime before starting each world tour.

“I have been getting ready for this tour now for months… picking the songs, working with my stylist, Robert Behar, on the costumes, rehearsing. I can’t wait to get back on the stage,” she said.

But Jackson’s new sleekness could also be attributed to a new attitude towards her body. A favourite target of the tabloids for her ding-donging weight over the past few years, Jackson is about to release True You: A Journey To Finding And Loving Yourself, a biographical/self-help tome in which she discusses the long-standing issues with her famous musical family and her career that led to her weight problems.

Last March, she told host Jay Leno on his popular talk show The Tonight Show With Jay Leno that her eight issues began when she was just 10. “When I was younger on (70s TV sitcom) Good Times, I was asked to lose weight. I wasn’t a heavy kid on the sow but I was 10 years old and developing very quickly, so they would put gauze around my chest to make me smaller. And I think that has an effect on you as a child, as if who you are isn’t good enough.”

Asked about the reasons behind writing the book, Jackson told The New Paper: “With True You, I wanted to help people understand the things I’ve gone through to bring me to where I am today, so they can understand that journey of the weight loss, the gain, the self-esteem issues, etc.”

Even as she finally come out to address her body image issues, Jackson is still very much a private person, side-stepping questions about how she’s been coping with the loss of her late brother, Michael, by saying: “We are a close family. We have always been.”

Her latest look – a fierce and warrior-like woman – is from the publicity shots taken for a US campaign for Blackglama, which traditionally features celebrities modelling the association’s line of furs.

“I have always been sort of a tomboy. I noticed it when I was doing a story with (fashion magazine) InStyle and they asked me to talk about photos of my fashion choices in the past,” she wrote. “It’s kind of funny.”

With over four decades of experience in show business, Jackson still displayed some awe over being a Blackglama spokesman, considering the other luminaries who have been part of that line-up.
“I was thinking that if someone told me, when I was a kid, that I would be part of this campaign alongside such legends as Diana Ross, Elizabeth Taylor, Lena Horne and Marlene Dietrich, I would have never believed it,” she said.

And she’s still expanding her career possibilities. Although she is best known as a pop star, Jackson has been busy lately starring in critically acclaimed African American director Tyler Perry’s films.
Acting, she said, is actually her first love. “I started acting first. I was 10 when I did Good Times. It’s something I really, truly love,” she said.

Next up for her? Possibly a role on Broadway. “It is a whole different type of discipline and I would like to experience that,” she said. “There is so much that I would like to do in the future. It took me a while, but I love my life. I only wish that I had this confidence when I was younger.” 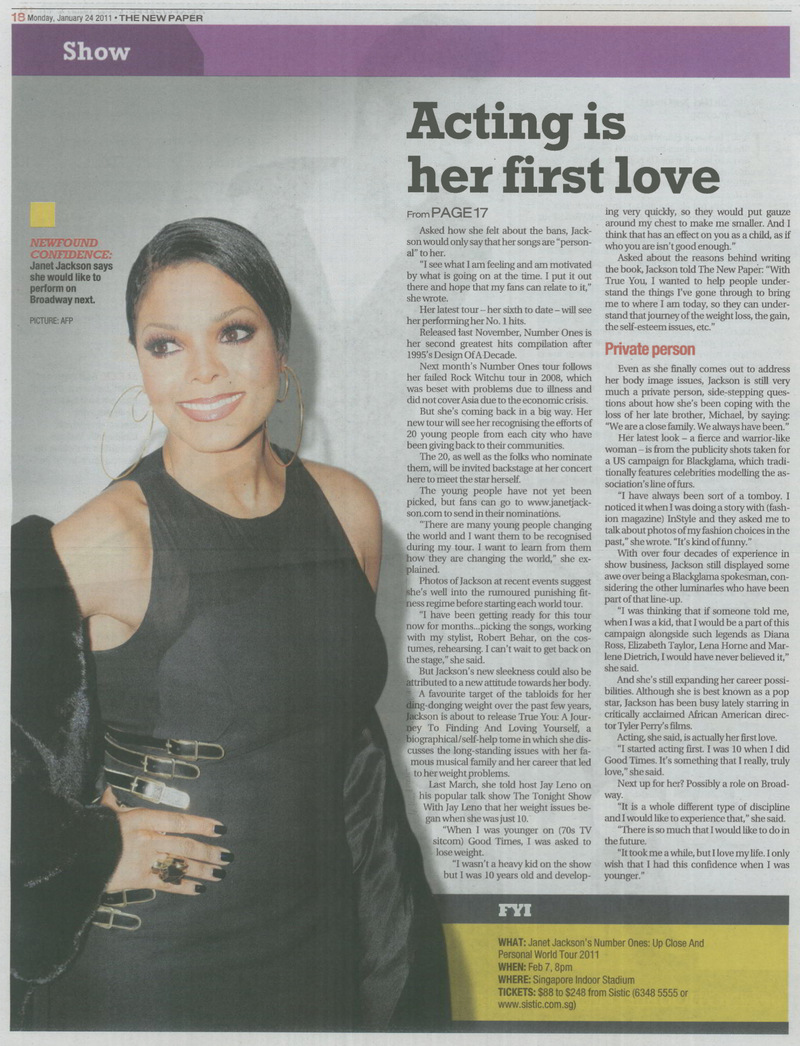 WHAT: Janet Jackson’s Number Ones: Up Close And Personal World Tour 2011