(Beverly Hills, CA) January 10, 2011 – Janet Jackson will be bringing her JANET JACKSON Number Ones, Up Close and Personal Tour to North America. The legendary Icon took the suggestions of her fans to heart and after her start in Asia she will be bringing the tour to the United States and Canada. Janet will be performing songs from her 35 number one hits in 35 global cities. Fans submitted suggestions to www.janetjackson.com to have their city selected. The winning cities so far have been over seas including Singapore on February 7th, Hong Kong on February 14th, and Taipei on February 18th and Manila February 4th. 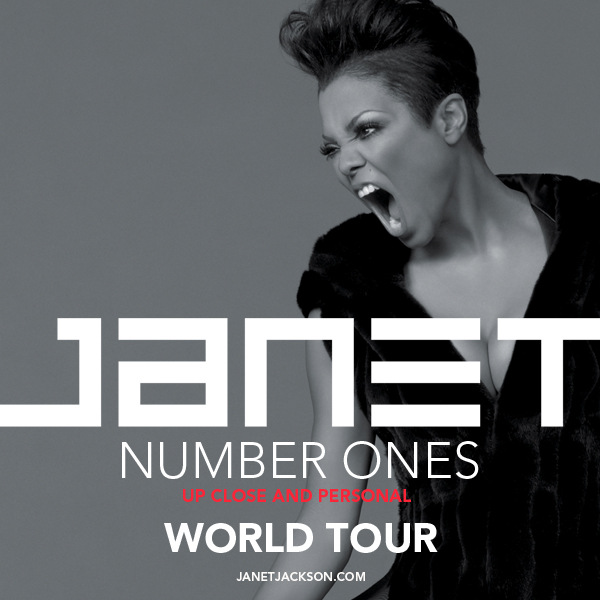 This tour will differ from her previous concert schedules in that she will perform music exclusively from her chart topping CD NUMBER ONES. There will also be a focus on venues that will allow Janet to be up close and personal in a much more intimate setting. In each selected city JANET will offer something different to her performance so no show will be the same. This tour is JANET more revealed, more intimate, and more personal than ever before. Don’t look for special effects. Just listen to and look at Janet, as you have never seen her before.

Janet has expressed her gratitude and excitement for the upcoming shows in North America with the following statement:

“I thank my fans who have voted and helped me choose the cities we are announcing today. Each of you are so important to me.
These concerts will be different from anything I have ever done. I will be as up close and personal as possible.
These concerts are not about special effects. This is a love affair between me and those of you who have supported me and my work for all these years.
I’ll be singing and dancing from my heart. The music will all be songs that you’ve made number ones for me. Let’s go!

In each city I want to meet 20 young leaders who are changing their communities for the better.
Please contact janetjackson.com so that I will know who is making a major difference in your city.
I’m asking my fans and their friends, Parents, relatives, neighbors and teachers to nominate five people to qualify as one of the 20 under 20 in each place I will perform.
At each concert the 20 people chosen and the person who nominated them will be VIP guests at my show. I will invite the 20 sponsors and the 20 winners to the concert and backstage.
There are many young people changing the world and I want them to be recognized during my tour.
I want them to be my guest at my show and they will come backstage as I learn from them how young people are changing the world.
You all know someone who is making a difference, so get in touch.
I love you all and I can’t wait to be back on stage, I’ve missed you,” –Janet

The US and Canada Tour Dates are as follows:

Toronto, ON, Canada March 12
Sony Centre for the Performing Arts

VIP tickets for all shows are coming soon…

Janet will also be selecting the first fan winner of the contest in voting for the each of the selected cities. The winner will be announced on www.JanetJackson.com and they will receive an autographed copy of NUMBER ONES and an autographed copy of her upcoming book “True You” (on stands February 8th). In each of the 35 cities Janet will dedicate one of her number one songs to the city.

Janet currently stars in Tyler Perry’s successful and critically acclaimed motion picture, “For Colored Girls.” Janet recently achieved number one iTunes status with her performance of “Nothing,” written and produced by her in association with Johnta Austin, Bryan-Michael Cox and Jermaine Dupri for the film “Why Did I Get Married Too?” for which she also starred. The tune is currently an awards contender as best song in a motion picture.

Her upcoming book “True You” is being published by Karen Hunter Publishing, an imprint of Gallery Books at Simon & Schuster will be in stores on February 8th. Janet’s first book will reveal her unique, insider’s perspective on dieting and exercise-from her past, present and future-with help from her personal nutritionist, David Allen. True You chronicles Janet’s lifelong struggles with weight and self-esteem. The book is a self-help/esteem book where Janet will use anecdotes from her real life to illustrate the power of self-esteem and how she struggles and her continued growth as an artist and a woman.