DUE TO OVERWHELMING DEMAND A THIRD HAWAII SHOW HAS BEEN ADDED! 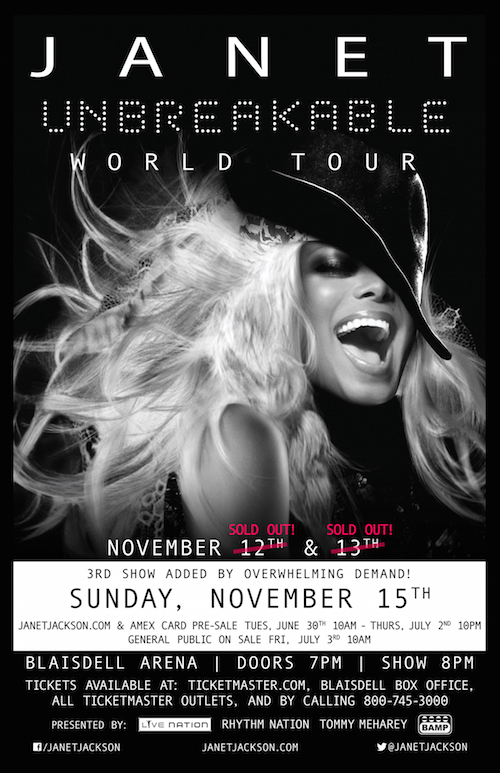 General Public On Sale Friday, July 3rd at 10am

Honolulu, HI, JUNE 29, 2015  — Due to overwhelming demand and immediate sold out ticket sales for both Janet Jackson’s scheduled Thursday, November 12 concert and the added Friday, November 13 appearances at Honolulu’s Neal S. Blaisdell Arena, Live Nation, Rhythm Nation, producer Tommy Meharey and Bamp project are adding a third presentation of JANET JACKSON’S “Unbreakable World Tour” on the evening of Sunday, Novermber 15. The unprecedented sellouts five months in advance reflect the same clamor across the United States for the iconic star’s return to concert performance and similar advance excitement and demand across the United States for the first (yet untitled) studio album for her new Rhythm Nation label to be distributed by BMG.

Tickets for the third Honolulu show go on sale to the public on Friday, July 3rd at 10:00 a.m. at Ticketmaster.com.  Tickets will be available in person at the Neal S. Blaisdell Box Office beginning Saturday, July 4th..

Music icon, multiple GRAMMY® Award-winner and multi-platinum selling artist Janet Jackson sent her fans into social media frenzy when she recently announced details of her highly anticipated international tour and an upcoming studio album.  “No Sleeep,” the first single from the upcoming album, debuted on Ms. Jackson’s Twitter and website on Monday, June 22nd and immediately reached the top spot on Billboard Trending 140.  Currently, “No Sleeep” is one of the most highly requested singles on the radio.

The UNBREAKABLE WORLD TOUR will return one of this world’s most influential entertainers back to the live stage in support of her upcoming album due out this Fall on Rhythm Nation/BMG. The first leg, will take the legendary artist to cities throughout the U.S. and Canada starting Aug. 31 in Vancouver, BC with shows lined up in Los Angeles, Chicago, Miami, Atlanta, San Diego, San Francisco, Honolulu and more. All dates are being co-produced by Miss Jackson’s Rhythm Nation.  Additional worldwide concerts will be announced at a later date.

“Moments after Miss Jackson’s Ultimate Icon award from BET last night, we learned that Hawaii’s conversations were heard by the Queen of Pop. We are being granted a third show! Thank you Miss Jackson.  Everyone: Get the new music and get your tickets! Hawaii, it’s on! There will be No Sleeep until Miss Jackson leaves Hawaii. Let’s keep the conversation going, ” said Tommy Meharey, one of the producers for the Janet Jackson Unbreakable World Tour.  Meharey, is the Oahu Marine, who dreamed of bringing Janet Jackson to Hawaii for seven years.  After countless outreaches, the icon agreed and Meharey partnered with Live Nation, Rhythm Nation and Bamp Project on the shows.

Janet Jackson  is one of the most influential entertainers of the modern era. Her music has won her 6 GRAMMY® Awards, 2 Emmy Awards, a Golden Globe Award, a nomination for an Academy Award along with dozens of American Music Awards, MTV Video Music Awards, BET honoree, and Billboard Music Awards. She has received accolades as an actor as well including the NAACP Best Supporting Actor award.  Janet is a published author, choreographer, dancer, businessperson, philanthropist and one of biggest-selling artists in popular music history. With sales of over 160 million records worldwide, Janet Jackson stands as one of the best-selling artists of all time with a string of hits that have left an indelible impression on pop culture. Her music and artistry has opened doors through which other top artists have followed, while acknowledging her impact on their musical perceptions.

Tickets on Sale At:

Details on the Shows:

$85.00 in advance plus applicable fees

$58.50 in advance plus applicable fees

$55.00 in advance plus applicable fees

$20.00 in advance plus applicable fees