Superstar’s Return To Live Performance to Kick Off August 31 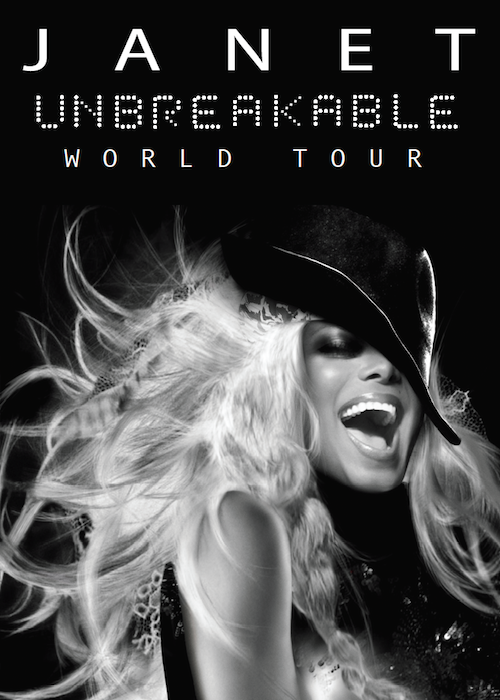 LOS ANGELES (June 15, 2015) – Music icon, multiple GRAMMY® Award-winner and multi-platinum selling artist Janet Jackson today announced details of her highly anticipated international tour. The UNBREAKABLE WORLD TOUR will return one of this world’s most influential entertainers back to the live stage in support of her upcoming album due out this Fall on Rhythm Nation Records/BMG. This first leg, a 36-date tour, 30 of which are promoted by Live Nation, will take the legendary artist to cities throughout the U.S. and Canada starting Aug. 31 in Vancouver, BC with shows lined up in Los Angeles, Chicago, Miami, Atlanta, San Diego, San Francisco and more. All dates are being co-produced by Miss Jackson’s Rhythm Nation. A full list of tour dates is below.

Additional worldwide concerts will be announced at a later date.

Tickets for the first North American live performances will go on sale starting June 22 at JanetJackson.com.  American Express Card members can purchase tickets for select shows before the general public beginning Monday, June 15 at 10:00 a.m. through Friday, June 19 at 10:00 pm. “American Express is thrilled to partner with an iconic artist like Janet Jackson on the UNBREAKABLE WORLD TOUR and bring our Card Members an opportunity to purchase tickets before the general on-sale date,” said Walter Frye, V.P., American Express Entertainment. “Adding Janet to our industry-leading ticketing partnerships is rooted in our mission to serve our Card Members’ deep passion for music.”

In addition to Live Nation and Rhythm Nation, other concert promoters will include Nederlander Concerts, Jam Productions, Another Planet Entertainment, and such promoters as Bamp and Tommy Meharey who will produce the Honolulu dates.

Janet Jackson is one of the most influential entertainers of the modern era. Her music has won her 6 GRAMMY® Awards, 2 Emmy Awards, a Golden Globe Award, a nomination for an Academy Award along with dozens of American Music Awards, MTV Video Music Awards, BET honoree, and Billboard Music Awards. She has received accolades as an actor as well including the NAACP Best Supporting Actor award.  Janet is a published author, choreographer, dancer, businessperson, philanthropist and one of biggest-selling artists in popular music history. With sales of over 160 million records worldwide, Janet Jackson stands as one of the best-selling artists of all time with a string of hits that have left an indelible impression on pop culture. Her music and artistry has opened doors through which other top artists have followed, while acknowledging her impact on their musical perceptions.

All dates, cities and venues below subject to change.

All dates below on sale June 22.